Whip shake, pour into a rocks glass, and fill with crushed ice. Garnish with an orange twist and mint sprig.

Two Tuesdays ago, Kara Newman posted that an article of hers had just been published in the Wine Enthusiast. It was about a drink called the Port World Cup Cocktail that was created at the Cure in New Orleans as Matt Young’s riff on the Manila Hoop Punch in Charles H. Baker’s 1939 The Gentleman’s Companion (which I made two days later). Matt was inspired by Manila being the “Global City” by utilizing spirits from around the world; his original was a split of rum and aged cachaça which was simplified for publication. 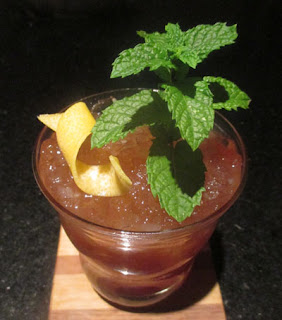 The Port World Cup greeted the nose with a mint, orange, and rum funk aroma. Next, lime and grape notes on the sip traveled to port wine, funky Jamaican rum, clove, and cinnamon flavors on the swallow.
Tags: cocktail, cup, port, World