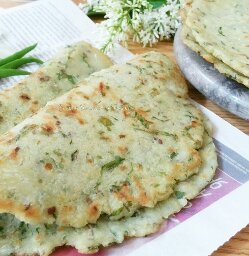 Sarvapindi also known as Akki roti in some areas, is a Telangana dish ( a state of India ) a famous snack or breakfast dish. It is traditionally made in two varieties either using green chilli paste or red chilli powder. They taste great either ways but might differ in appearance. These Masala Akki Roti with Spinach are filling and healthy, and can be served with chutney or yogurt.