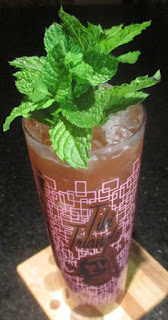 Whip shake, pour into a Zombie glass or Tiki mug, fill with crushed ice, and garnish with mint sprigs.

Two Thursdays ago, it was in the middle of Negroni Week, and I wondered if I could make an interesting mashup with the 1919 legend and a classic Tiki drink. The one that I selected was the 1934 Zombie which I had previously done in a stirred format (and no gin) with the Count Rides Again, but this concept was more citrus driven. To the Zombie recipe, I upped the grapefruit and cinnamon quotient for both pair rather elegantly with Campari such as in the Tasmanian Twister and Rum Firewalker, respectively. Moreover, I dropped the falernum for there were already enough spiced and herbal elements added to the mix. I also amped up the grenadine considerably for it has frequently been paired with Campari in modern Tiki drinks such as in the Freaky Tiki and in my Jungle Grog (one book referred to the flavor duo as “bittersweet”).

For a name, it came down to Zombie Count and Count Zombie as a nod to Count Camillo Negroni, and the former won out. Once assembled, the Zombie Count lurched to the nose with a mint, berry, and pine bouquet. Next, berry, grapefruit, and lime notes attacked the sip, and the swallow bit in with gin, cinnamon, fruity, and spice flavors. Overall, the citrus combined with the grenadine, vermouth, and Campari in a complex fruit punch sort of way.

a six for a nine

Episode 140 – Cocktails in a Time of Plague — Modern Bar Cart