Whip shake with crushed ice, pour into a Tiki mug, and top with crushed ice. Garnish with a pineapple frond, pineapple half moon, and cucumber rosette (mint sprigs and a cucumber slice).
(*) Equal parts cucumber juice and sugar. While the original used a juicer, I muddled cucumber chunks followed by a fine straining step. At one bar I worked at, we used a blender followed by fine straining. 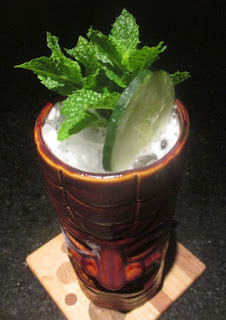 With a beautiful cucumber from our farm share (my garden’s cucumbers will be ready by the time this post airs) in my possession, I returned to a recipe from Brian Maxwell’s quarantine drinks on his Shaker of Spirits blog. The recipe was the Yoi-Yoi-Comber which was he posted on the eleventh day of lockdown, and I did not have a cucumber at the time but marked the page for future reference. The concept was a tribute to Joe Scialom’s Cou-Cou-Comber as well as to Myron Cope, the voice of the Pittsburgh Steelers who used the word “Yoi!” a lot during his announcing. The Yoi-Yoi-Comber greeted the senses with an anise, mint, and cucumber aroma. Next, lime, vegetal, and pineapple notes on the sip announced the arrival of pineapple, cucumber, ginger, and anise flavors on the swallow.
Tags: cocktail, slut, virgin, yoiyoicomber