Shake with ice, strain into a double old fashioned glass with a large ice cube, and garnish with a banana slice and 3 drops Tiki bitters (Bittercube Jamaican #2).

Two Tuesdays ago, I spotted an intriguing Whiskey Sour riff in a Father’s Day drink article in The Bourbon Review called Without Faculty. The recipe was crafted by Tony Burke, a bartender and Virginia’s Angel’s Envy whiskey guardian, and he named it after his father’s reason for not drinking much. His dad explained, “I don’t want to lose control of my faculties”; the rest of Tony’s tribute was relate to his father’s love of Banana’s Foster dessert and all things ginger. Since that pairing was delicious in the Holy Molé! and the X Marks the Spot, I was excited to give this one a go. 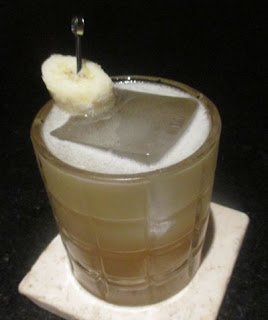 The Without Faculty met the nose with banana and ginger aromas. Next, lemon and malt on the sip led into Bourbon, banana, and ginger flavors on the swallow. Moreover, the port finish notes from the whiskey added a delightful level of fruity complexity on the swallow.
Tags: cocktail, faculty, slut, virgin