Shake with ice and strain into a rocks glass with fresh ice. The house spec had no garnish but Sam has added 3 raspberries on a pick and a lemon twist in competitions.

Two Sundays ago, I opted to make a recipe that I had bookmarked for its use of raspberry syrup as well as Bourbon which would work with Angel’s Envy’s Toast the Trees. Toast the Trees is a yearly event coinciding with National Bourbon Heritage Month to draw attention to our waning oak forests in America that are essential for Bourbon’s aging. For each social media post with the hashtag #ToastTheTrees in September, the distillery will plant an oak tree in the Spring. So with Bourbon’s future in mind, I decided to make a classic from Russell House Tavern that I recall seeing on the menu on 2012, and I certainly made a bunch when I started working there in 2013 called the Whippersnapper. The drink was bar manager Sam Gabrielli’s Bourbon and bitters riff on Jerry Thomas’ rum Knickerbocker, and I spotted it on the restaurant’s social media this month, so it is still being enjoyed in town. 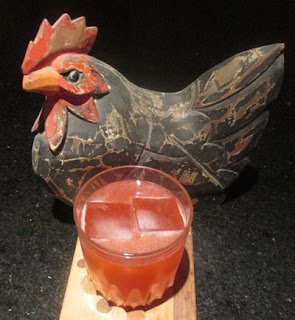 The Whippersnapper attacked the nose with an orange and raspberry bouquet. Next, lemon, berry, and malt notes on the sip wisened up to Bourbon and orange flavors on the swallow with a raspberry and clove finish. Definitely the addition of bitters to the mix provided extra structure to this Daisy.
Tags: cocktail, slut, virgin, whippersnapper