Two Mondays ago, I began to think about Don the Beachcomber’s 1970 Volcano Bowl that was delicious due to the maple syrup-grapefruit juice combination. I considered taking it in a Cleirmeil direction with Green Chartreuse, but I decided to introduce the cachaça-Jagermeister duo that worked elegantly in Sother Teague’s Rough Seas. For a third spirit after the rum and cachaça, I pondered Cognac before opting for aged apple brandy to tie in better with the maple syrup. Since my maple syrup was from Vermont, the Firefly Festival held there every year with their large burn at the end came to mind as a parallel to a volcano. Given the Brazilian origin of cachaça, I went with the Portuguese word for firefly in the name: the Vagalume Bowl. 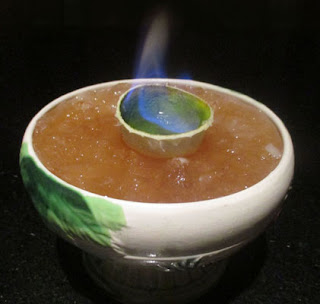 The Vagalume Bowl greeted the senses with maple, apple, and grapefruit aromas once the fire was extinguished. Next, maple’s mouthfeel joined caramel, grapefruit, and lime notes on the sip, and the swallow rolled on with grassy, funky, apple, maple, and ginger spice flavors.
Tags: Bowl, cocktail, slut, vagalume, virgin