Muddle the mint leaves in the bottom of a julep cup or double old fashioned glass. Dissolve the sugar in water (use simple syrup instead) and add the rest of the ingredients (I also removed the muddled mint leaves). Fill with crushed ice and garnish with mint sprigs.

Two Sundays ago, I saw a mention of the St. Regis Mint Julep from Stanley Clisby Arthur’s 1937 book Famous New Orleans Drinks & How to Mix’Em and was in the mood for a Julep. I, therefore, hunted out my reprint which provided the history that it was created by John Swago at the St. Regis Restaurant bar, and the split base reminded me of the American House and Prescription Juleps except here it was rye and rum instead of rye and brandy. The rye aspect instead of the more traditional Bourbon always makes me think of the quote from Richard Harwell’s The Mint Julep book where Kentucky humorist Irvin S. Cobb declared, “Any guy who’d put rye in a mint julep and crush the leaves would put scorpions in a baby’s bed.” 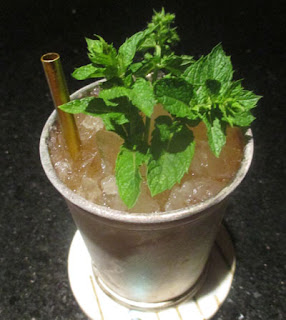 The St. Regis Mint Julep began with an elegant mint bouquet presented to the nose followed by malt, caramel, and berry on the sip. Next, rye, rum funk, and mint on the swallow ended with a pomegranate and mint finish. Indeed, the inclusion of grenadine as part of the sweetener was delightful with its fruit notes akin to the peach element in the Georgia Julep.
Tags: cocktail, julep, Mint, regis, slut, virgin

Episode 168 – Sex is Not a Tasting Note — Modern Bar Cart