Whip shake, pour into a double old fashioned glass, and fill with crushed ice. Garnish with a lemon wheel and a sprinkle of black sesame seeds (lemon wheel and chocolate mint sprigs).

Two Thursdays ago, I was in a Tiki mood, so I reached for David Montgomery’s Zombie Horde book. There, I latched on to Jim Meehan’s Shipwreck that he created at PDT in 2013. The Madeira in the Zombie riff appealed to me for I had tinkered with Madeiras in the Island of Lost Souls, and the aquavit was definitely a good thing given its role in the the Norwegian Paralysis, Viking Fogcutter, and Port of Göteborg. I probably had skipped over this one since I feared that the healthy slug of absinthe would dominate this libation, but I was wrong. 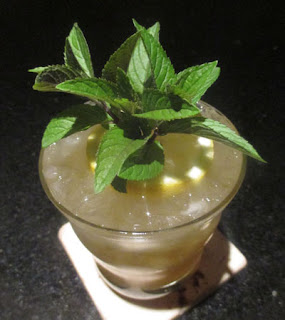 The Shipwreck met the nose with rum funk, tropical, and anise aromas that were accented by my choice of chocolate mint garnish. Next, lemon, pineapple, and grape mingled on the sip, and the swallow was an intense combination of funky rum, caraway, and herbal anise spice flavors. Given how burly the spirits in the mix were, they all seemed to keep each other in check.
Tags: cocktail, shipwreck, slut, virgin