Stir with ice and strain into a cocktail glass; I added a lemon twist.

Two Fridays ago, I returned to Pioneers of Mixing at Elite Bars: 1903-1933 and decided to make the Narragansett. While this Scotch drink shared the namesake of the Rhode Island brewery that was founded in 1890 and was once a major sponsor of the Red Sox for the first half of the twentieth century, the name goes much further back. It is an Algonquian Indian language, and the word means “(People) of the Small Point” (the point being on the Salt Pond in Rhode Island). Overall, the Narragansett reminded me of the Chancellor where the whisky was supported by aromatized and fortified wines as well as orange bitters. 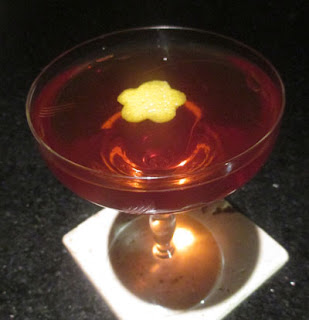 Once prepared, the Narragansett donated a lemon, peat smoke, and cherry-like grape aroma. Next, malt and plum notes on the sip slid into Scotch, nutty, and cherry fruit flavors on the swallow.
Tags: cocktail, narragansett, slut, virgin