Around two weeks ago, Allan Katz, the owner of Las Vegas’ Jammyland Cocktail Bar & Reggae Lounge (and not the New York distiller Allen Katz), went on a rant about the Mai Tai on Twitter; this should not be too surprising given that his profile reads “defender of the Mai Tai #deathtofalsemaitais.” His rant was how the Mai Tai has been changed to remove its Jamaican roots, and how certain brands claimed solidarity with Black Lives Matter yet change the rum to their non-black island spirit. He argued that the Mai Tai was invented with a 17 year old Jamaican rum, and only its dwindling availability forced a change. While that rum is essentially no longer available, the base he argued needed to be Jamaican and not something other in the Caribbean. I commented that even Trader Vic knew that by calling his Mai Tai with Puerto Rican rum by a different name — the Mehune Juice. I had never made this recipe for it appeared too similar to the Mai Tai itself, but now with this rant fresh in my head, I performed the experiment. 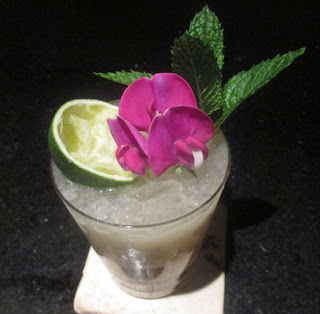 The Mehune Juice began to appear in the Trader Vic literature during the 1970s, and I sourced the recipe his 1974 Rum Cookery & Drinkery book. I then learned that mehune are the flowers in the Hawaiian lei, and I would soon discover that the Mai Tai is not the same without a Jamaican rum. The Mehune Juice met the nose with a mint and lime aroma. Next, a creamy, lime, and caramel sip flowed into rum, orange peel, and earthy-nutty flavors on the swallow. Without the funk that Jamaican rum carries along, the drink was rather delightful but lacked any degree of pizazz.
Tags: cocktail, Juice, mehune, slut, virgin

a six for a nine