Shake with ice and strain into a cocktail glass; I added an orange twist.

Two Sundays ago, I returned to the 1930 Savoy Cocktail Book and spotted the Journalist Cocktail. This Perfect Martini had the touch of sweetener and citrus that I last saw in the Dry Martini riff When the British Came to Spain, and it was somewhat reminiscent of the Old Hall from the 1930s. 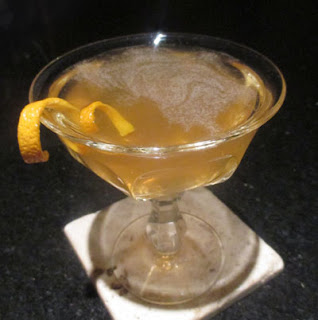 When I made the Journalist and posted it on Instagram, someone asked why I shook the drink. I commented, “It could have been stirred, but the book said to shake. With such a small amount of lemon juice, it could go either way. I envisioned it like an Income Tax/Bronx in my head so I went with [shaking] it.” I also replied to his follow-up question with “I’ve had stirred citrus drinks and designed a few when the effect is to have a silkier mouthfeel. The other issue is that the Savoy frequently recommends shaking drinks that we would stir today such as the Manhattan.” I remember that the Savoy Cocktail Book and others that we bought back in 2006 and 2007 were rather confusing since there were no hard and firm rules on when to stir or shake a drink. Once prepared, the Journalist wrote up an orange oil and peel aroma accented by juniper notes. Next, a grape and lemon sip gave way to gin, orange, and allspice flavors on the swallow.
Tags: cocktail, journalist, slut, virgin

Episode 140 – Cocktails in a Time of Plague — Modern Bar Cart