Stir with ice, strain into a cocktail glass, and garnish with a pickled onion.

Two Saturdays ago, I felt like ending the night with a Martini, and then I remembered the pickled onions in the refrigerator and opted for a Gibson. In Imbibe, David Wondrich quoted the Oakland Tribune as declaring that, “The Gibson is a blend peculiar to San Francisco,” and San Francisco bartender William Boothby described how it was named after Charles Dana Gibson. There were also other possible histories such as San Francisco financier Walter D.K. Gibson who drank alongside Charles at the Bohemian club and claimed to be the impetus of its creation circa 1898. Boothby’s 1908 recipe was equal parts Plymouth Gin and French vermouth without bitters or garnish. Surprisingly, early recipes were unadorned with the onion that defines the modern day Gibson. Robert Simonson in The Martini Cocktail placed the garnish’s timeline as, “By the 1930s, the onion had begun to sneak into the drink. By the 1940s, it had a permanent home.” Alas, my favorite lore of how Gibson’s bartender utilized the onion to demarcate the chilled water alcohol-free “Martini” so that he could be sober during business deals as his cohorts got a bit tipsy is mostly like just a barroom fable. 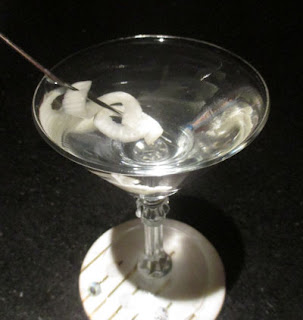 Normally, the mid-century Gibson Cocktail is garnished with a pickled pearl onion, but I figured that my lactic ferment onions (see below for more information) would work well here. This sort of naturally fermented style was what we used in our Martinis at Loyal Nine, and one of the regulars’ favorites were the yearly batch of pickled ramps fermented in this style. The Gibson recipe that I utilized was the one from A Spot at the Bar which was a bit more dry vermouth forward than the one in Simonson’s book. Once prepared, the cocktail wafted to the nose pine melding into onion aroma along with orange accents. Next, a clean, crisp sip marched into juniper, citrus, licorice, and cucumber-vegetal flavors on the swallow with an onion finish. Definitely some of the notes from the cut onion ring had pleasantly entered into the drink. 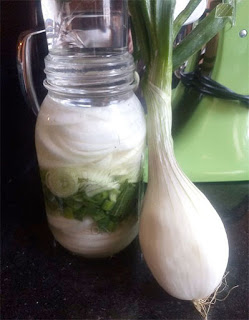 Since we had bought into a farm share (besides our own vegetable garden plot) as we are cooking more at home, we receive a bounty of vegetables. One of the early boxes contained a green cabbage and the next one a Napa cabbage. The green cabbage went into sauerkraut and the Napa into kimchi, and the ferments utilized the lactobacillus microbes naturally on the cabbage’s leaves. The magic here is the addition of salt (generally in the 2-6% by weight) which inhibits other bacteria from acting on the vegetables; moreover, a weight of some sort to keep the vegetables under the brine and away from the air seals the deal. Within 7-10 days, the bubbling stops and the lactic pickles are ready to be refrigerated. To make the onions, I cut up two medium onions along with their green stem, added 2 ounces of sauerkraut brine as a lactobacillus starter, and filled it with 3.5% salt brine. The end result is a tangy and crisp vegetable without the harshness of vinegar’s acetic acid used in the quick method; moreover, that vinegar generally requires a substantial sugar content to balance the zing, while my lactic pickles end up rather bone dry.
Tags: cocktail, gibson, slut, virgin