Shake with ice, strain into a cocktail glass, and garnish with a lime wheel and pineapple frond on an umbrella pick (omit frond).

Two Thursdays ago, I received the list of the winning recipes from the Tio Pepe (Sherry) Cocktail Contest, and I immediately latched on to the Fino Island created by Sam Treadway of Backbar. The combination of pineapple, orgeat, and Chartreuse was one that worked well in the 19th Century Swizzle and the Kumulipo, and I was curious to try it with Fino sherry as the base. Sam described how he reflected on his year in Hawaii after he left Drink before returning to the mainland to open Backbar as his inspiration here. 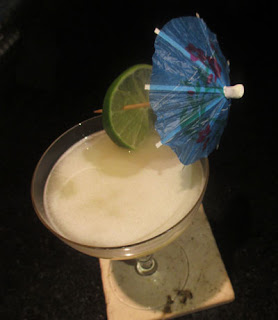