Stir with ice and strain into a cocktail glass pre-rimmed with sugar.

A few weeks ago, I had answered a request if I could provide a photo of the original Fancy Free recipe that appeared in Crosby Gaige’s 1941 Cocktail Guide and Ladies’ Companion, and I soon realized that I had never written up the drink before. Perhaps the last time I had the Fancy was at the infamous Cambridge cocktail Mecca, the B-Side, around 2007 which was my first drink there after I got into mixology. Technically, my first order there was in late 1998 or early 1999 only a few months after they had opened. My friend was dating a girl that lived around the corner on Windsor Street, and one night we made it over there as a group. We did not even have a menu in hand before the waitress asked what we would be drinking. My friend’s girlfriend requested a Lemon Drop, and in a panic, I replied “Me too.” I mentioned that story in my curious past with that 1970s classic in my Lemon Drop Crusta riff. The Fancy Free that I got at the B-Side was served in a rocks glass although I cannot remember if it was served down or on the rocks. The 1941 recipe surprised me for it was closer to a Crusta in presentation save for how Crustas traditionally have citrus in the mix in both juice and twist garnish. Lastly, the Fancy Free was my inspiration for the Gallivanting in Golden Gai which was a mashup with the Japanese Cocktail. 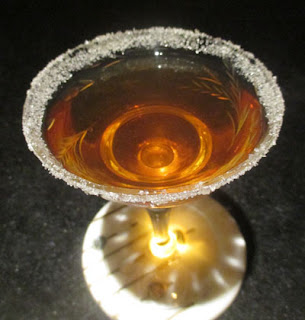 The Fancy Free met the nose with a Bourbon and nutty cherry aroma. Next, a malt-driven sip led into Bourbon, cherry, and allspice flavors. When Andrea tasted the Fancy Free again, her comment was how there was “a lot of nostalgia here.”
Tags: cocktail, fancy, Free, slut, virgin