Stir with ice and strain into a double old fashioned glass with a large ice cube.

Two Saturdays ago, I returned to Leo Robitschek’s The NoMad Cocktail Book where I spotted his Doyers Street that read like a Brookyln Cocktail with elderflower liqueur and Angostura Bitters in place of the classic’s Maraschino. Doyers Street is a short, historic street in Manhattan’s Chinatown that has been deemed the bloodiest street in America. In its 200 foot length that includes a near 90 degree bend, the “Bloody Angle” was the scene of gang fights among its gambling houses, theaters, opium dens, pool halls, and prostitutes. This came later than the Irish gangs of the “Streets of New York” era in the 19th century, for it occurred between Chinese gangs in the first few decades of the 20th century. The violence using hatchets and guns was so great that records showed that it earned the title of the most violent intersection in the country. 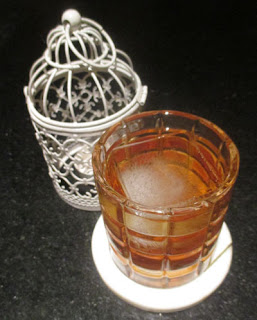 The Doyers Street teased the nose with an elderflower, bitter orange, and clove bouquet. Next, caramel and orchard fruit on the sip slipped away into rye, bitter orange, floral, and allspice flavors on the swallow.
Tags: cocktail, doyers, slut, street, virgin