Shake with ice, strain into a cocktail coupe, and garnish with a lime wheel.

Two Thursdays ago, I stumbled upon the Coronian with apricot and Swedish punsch in the Café Royal Cocktail Book . Since I had already made that one, I took my desire for a Daiquiri and merged it with my inspiration from the Coronian in the direction and form of the Periodista. Instead of orange liqueur in the Periodista, I opted for Swedish punsch that I first discovered worked rather well with the punsch in the Havana Cocktail (see the Swedish Punsch Cheat Sheet for more pairings) and for overproof Jamaican rum as the base spirit. As a name, I called this one the Between the Devil and the Deep Blue Sea after a book on the most unruly of Caribbean ports, old Port Royal in Jamaica. 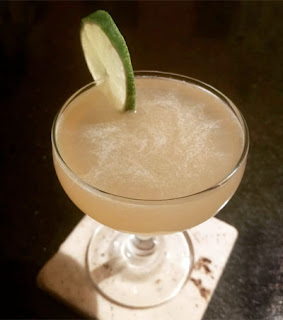 The Between the Devil and the Deep Blue Sea met the nose with a bright lime aroma over rum funk, orchard fruit, and dark notes from the Swedish punsch. Next, a lime, caramel, and orange sip sailed into funky rum, apricot, and tea flavors on the swallow.
Tags: Blue, deep, devil, Sea